Everyone has heard or had to deal with Nexus in one way or another throughout their life as a producer. This quite controversial instrument plugin in the world of music production, especially because of its out of the box sound, is either called a synthesizer or ROMpler. It depends on who you ask. However, Nexus is one of the most used virtual instrument, precisely because it has contemporary sounds that can be used immediately. Now it returns bigger and bolder than ever. Let’s take a look at some of the improvements and additions.

First, given the nature of Nexus, I would mention the amazing new preset browser (librarian) which comes with three columns for folders, categories, and presets. Now you can use color-coded tags, add bookmarks, set your own favorites, and create a custom location for user presets. Interactive search and audio preview are also added.

There’s a completely reworked arpeggiator page with sixteen layers in addition to the main arpeggiator, plus, you can extend the pattern length up to 256 steps. With the new sequencer mode that allows multiple notes per step and per-note velocity, you can create complex patterns and grooves. Nexus also comes with four quick-access macro controls and a total of 20 modulation slots.

Expect a fully revamped effects page, now with visualization of the signal-flow to give you real-time feedback. There are four insert effects, four equalizers, filter, reverb, delay, impulse, and limiter. 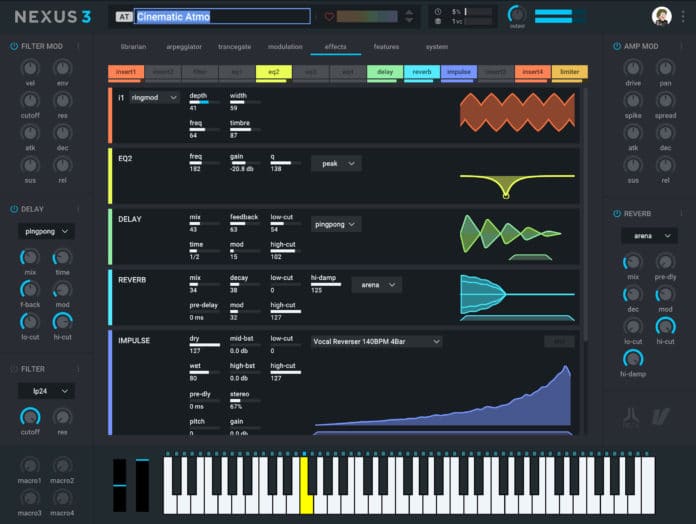 And since the look is one of the most important factors nowadays, Nexus aligns to the modern standards with its new flat and resizable GUI. A big improvement is Nexus can now be activated online – no more dongles or other third-party tools required. For those who worry, it is essential to mention that Nexus 3 is compatible with your existing Nexus 2 libraries. Speaking of expansions, now there’s “reFX Cloud App” from where you can easily install your libraries.

It worth mentioning the factory content which has been expanded to more than 350 new presets, also the new cloud-sync system where you can store your saves (favorites, bookmarks, user presets, and settings) and access them everywhere.