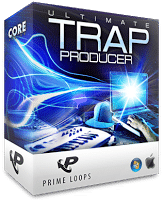 Trap music captures the phattest elements of southern hip-hop, crunk and dutch house and chews them up into an erratic pulp which is then boiled down into a potent concoction of beats, punctured by the sound of crisp, biting hi-hats often courtesy of one classic piece of kit; the Roland 808 drum machine! This club-rousing genre just couldn’t contain itself in the underground and has recently fizzed up into the mainstream consciousness, causing quite a stir!

Cranked up to a mighty 1GB! Ultimate Trap Producer allows you to immerse yourself in a cyclonic world of lead synths, synth chords, 808 one-shots, basslines, and drums available both as fully mixed and individual drum loops! From the menacing gait of ‘Doom Box’ to the rave inciting ‘Game Changer’ and the sonic sting of ‘Ray Gun’ you are invited to manipulate these sounds into your mix by downloading directly on to your hard drive! The next step is simply selecting your sample and dropping it right into your chosen software! Sit back and watch it sync automatically then get it’s time to creative! Wanna change that tempo? Each of these 24-bit samples can be extended to create a slower tempo or compressed for a faster BPM! Sick of sample clearance forms? We certainly are, which is why Ultimate Trap Producer is 100% royalty free!

This collection of sounds is available for only £19.95 on Prime Loops.