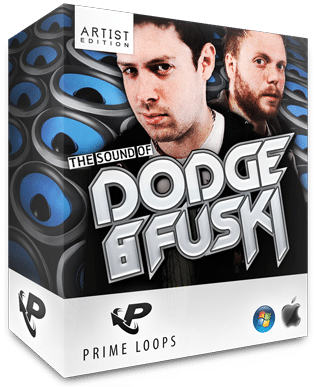 Prime Loops has announced the release of The Sound Of Dodge & Fuski, a new sample pack part of the Artist Edition series.

Dodge & Fuski have racked up an epic amount of views on Youtube since the beginning of 2011, currently standing at over 3 million and still rising! As if being championed by Radio1 and 1 Xtra wasn’t enough, the pair have also enjoyed plenty of attention from leading YouTube dubstep channel UKF.

In the dark depths of Dubstep, D&B and Electro, it can be a challenge to find a fresh sound but these boys have been twisting their own flavour out of these genres for years.  The pack they’ve expertly crafted for us weighs in at a massive 515MB+, arming you with all the tools required to fix up your tunes with fresh, 24-bit Dubstep definition! From ultra deep wobbles, stomping drums loops and slippery synth skanks, to stadium-sized synth leads and tons of one-shots, this pack truly has it all!