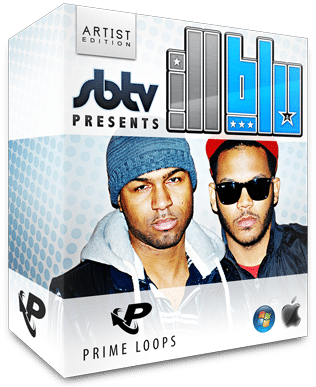 SB.TV, also known as SmokeyBarz, is a big player in the collage of London’s rapidly evolving music scene, providing web-based viral content from music events around the world. For this sample pack, SB.TV has teamed up with one of the most esteemed production duos to emerge from the capital in recent times – Dary and Jreel, better known as Ill Blu.

Ever since their first massive hit, the Funky anthem “Frontline” featuring Princess Nyah, Ill Blu have been rooted firmly at the forefront of UK bass music. Just check out their recent activities for proof – remixes for artists such as Roll Deep, Cheryl Cole, Hot Chip and MJ Cole, music released on labels such as Hyperdub and Numbers, a weekly residency at legendary London radio station Rinse FM.

Together Ill Blu have created a star-studded Prime Loops sample pack at over 580MB and containing a whopping 10 Song Kits, boasting a wide range of mixes at 125-140Bpm to tailor for an abundance of recording styles. All the 24-bit files within this royalty-free collection have been split into individually optimised tracks, all ready to instantly expand your versatility and creativity.