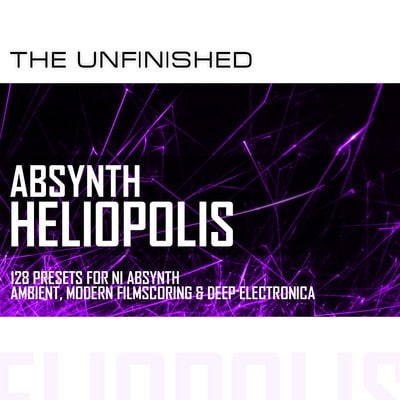 The Unfinished has announced the release of Absynth Heliopolis, a commercial collection of 128 presets for NI Absynth VSTi. Its target is ambient music, but is perfect for modern film scoring and deep electronica too. And as usual, Matt Bowdler is giving away 20 free presets to try before you buy!

“Matt is a master at creating brilliant new sounds. Heliopolis is no exception. It’s one of those banks I wish he wouldn’t sell to anybody else!”
– Sascha Dikiciyan, aka Sonic Mayhem, Composer/Producer (Mass Effect 3, Borderlands 2, Tron: Evolution, Quake Series).

Something of a ‘concept album’ style soundset, each prest has been designed to reflect the fictional city of Heliopolis: a once great metropolis on a distant planet, now reduced to dust and decay, with only sombre stories to relive its once great history.