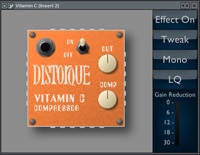 I’ve been having a lot of fun with this one, it’s a weird beast. Firstly, it has this nice swell because the level sags a bit after the attack, then returns to the normal compressed level. Secondly, it has a weird ratio curve; it doesn’t have a constant ratio like 4:1 during compression. Instead, it’s kind of like a limiter with a very soft knee, but that stops reducing gain once the signal gets hot enough. Thirdly, you can get some grit by messing with the attack and release controls (this is intentional, by the way). All in all, it’s definitely not hi-fi, but it has lots of character.

Vitamin C is available as freeware on Distorque.

Direct Approach Sets All Their Plugins as Free Downloads