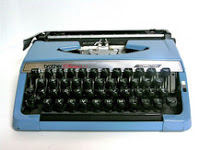 I have sampled numerous mechanical sounds this typewriter produces during operation. The sample pack can be used for foley, sound fx, musical composition, and anything else you may think of. They were recorded dry as mono 16 bit 96khz .wav files.

I did not record multiple velocity levels because the machine does not typically have a wide dynamic range in normal operation. The pack includes several “press” and “release” samples. This reproduces the sound a typewriter key makes when it is pressed, and the other sound it makes when released, creating rhythmic flexibility. It also includes those sounds combined together into 1 sample.

I have created a mapping of the sounds for ShortCircuit Sampler ver 1.1.2
The range is from C2 to C5. Some are mapped to press and release, some to forward shot, and some looped.
The sample names should be pretty self explanatory. I have included 3 rough rhythmic loops as a bonus.

The Brother Typewriter is available as freeware on Subtersonic.

Function Loops “Fx In The Jar” Sample Pack Is Free for a Limited Time!