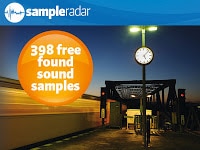 These sounds are post-processed using for loops- the Kurzweil K2600r effects engine and for the beats, Kontakt from Native Instruments.

Featuring sounds that were captured in places as diverse as Paris, London and the ring road around Bristol, this week’s beats and loops are unlike any you’ve heard before.

These samples are in 24 Bit WAV format, they are royalty free but you’re not allowed to redistribute them. This pack was previously featured on Computer Music magazine’s cover DVD.